Lego was created in 1932, and almost 90 years later it still remains the most popular children’s toy- a testament to its timeless design. Lego’s mission is ‘to inspire and develop the builders of tomorrow’ with an overarching purpose of ‘inspiring and developing children to think creatively, reason systematically and release their potential to shape their own future - experiencing the endless human possibility.’ Their colourful blocks, assembled to build buildings, towns and vehicles, in many ways also act as a medium through which children come to understand the world around them.

Lego’s focus on child development is reflected beyond their product too, for example their RE:Code events that support children in nurturing real-life skills, ranging from science to engineering to art. Areas include recycling, air pollution and water pollution, where children learn essential coding and programming skills to do things like pick up trash and deposit it at a recycling plant, or explore the future of electric vehicles. What remains congruent throughout all their products and schemes is their overarching focus on problem-solving, which inevitably plays a huge influence on children’s future capabilities.

If companies adopt Lego's same candid approach to accountability and similarly work to cultivate a higher purpose beyond sales of products, step by step we’ll move closer towards a more equal, fair and inclusive society.

Lego face their own fair share of issues as a business- their plastic building blocks are certainly no secret. However, with their plant-based block release in 2018, and a public pledge to be totally sustainable by 2030, they continually demonstrate their dedication to doing better. This was reflected in 2020 after the unlawful killing of George Floyd, an unarmed black man at the hands of the police. Following the tragic incident, many brands were called out for their disingenuous and performative statements on anti-racism, whilst others were recognised for their sincere commitment to being better allies. Lego were among the latter party after they donated $4 million dollars to organisations dedicated to supporting black children, and educating all children about racial equality- a mission distinctly in line with their own. 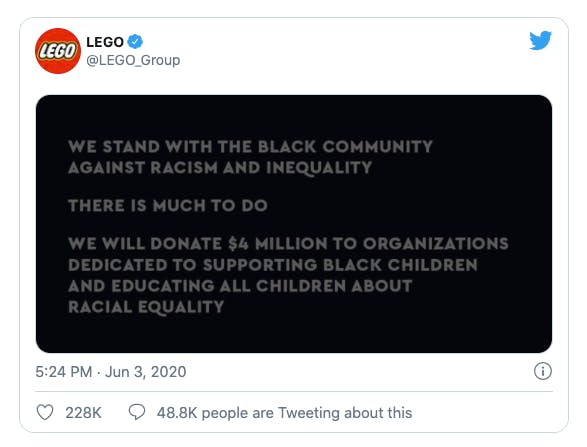 They also took things a step further after an introspective review of their own product where they considered how it could be potentially playing into a destructive narrative. Consequentially, they made the decision to call for the discontinuation and removal of all marketing and product listings of any of their toy sets that included police characters or police themes (including the White House).

Lego have been applauded for their progressive approach to handling complex issues more than once. If companies adopt Lego's same candid approach to accountability and similarly work to cultivate a higher purpose beyond sales of products, step by step we’ll move closer towards a more equal, fair and inclusive society.

Build Purpose into my Business
Written by

What do Gen Z look for in today's brands?